New Jersey has been such a pleasant surprise. After the trials of Pennsylvania, which included a heat wave (where I may or may not have gotten heat exhaustion), a storm that produced five inches of rain in one night (you better believe my tent flooded, but it made for an exciting evening), seemingly never-ending mosquitoes, and rocks upon rocks upon rocks that bruised and battered my already swollen feet, it was exactly what I needed.

New Jersey may get a bad rap in the pop culture world, but as far as the trail goes, it deserves its designation as the Garden State. The terrain is easy, the views are lovely, the lakes are plentiful, and there seem to be black bears everywhere. Until arriving here, I’d yet to see a trail bear (I don’t include those I’ve seen from cars). And in Jersey, I saw two in one day.

I also had a somewhat serendipitous day in this state (the two-bear day, actually). I’d been wanting to do a marathon day (hike 26.2 miles in one day) for some time, but I have two things working against me: I hate getting up early, and I’m a little bit of a slow hiker (short legs, you know). But I decided one day in Jersey to give it a go. I set my alarm for 5:45 a.m. and even asked Ace, a section hiker who I befriended for the evening as we were the only two people at our campsite, if he’d give me a shout if he was up before me. He wasn’t, and I didn’t arise until almost 7 a.m., but it worked out just fine anyway.

As I started marching that morning, I found myself in a spectacular mood, full of energy. The sun shown brightly as there wasn’t a cloud in the sky. Only a few miles into my hike, I saw my first trail bear. (It quickly ran away). Only a few moments later, I ran into Stan the Man, a section hiker who aspires to thru-hike in the future. We had a nice chat and he let me know that he’d left a cooler of ice cold drinks ahead. (If there’s anything I crave in the woods, it’s cold drinks.) I helped myself to a Gatorade, packed out a Coca-Cola, and went on my way.

I had the Coke a few miles later at a lovely fire tower view, thinking it would push me to do a few more miles before lunch. As I was enjoying the soda, my friend Show Pony texted to let me know there was big trail magic seven miles ahead. I was trying to catch up with him anyway, so the combination of the knowledge and soda pushed me quickly down the trail. I caught Pony and had a heaping plate of picnic fare, much needed on this double digit miles day.

Though I spent the first hour after leaving the trail magic on the verge of falling over from fullness, I pressed on and my energy levels returned nicely. I’d also packed out another soda for a final sugar and caffeine burst, which I drank an hour or so before dark. Shortly after, I saw my second trail bear. Not only was that extra exciting, but it also made me want to get my miles in to give me some space from the bear.

I witnessed a colorful, bright sunset over a rural farm as darkness descended over the land, and I played some Dua Lipa on my phone to warn any lurking animals that I was near. I quite enjoyed the hour nighttime portion of my hike, though I did have one scare. At one point, about a mile away from my shelter, the bright green eyes of a tall animal glowed at my from up the trail. I clapped, I stomped, I yelled, and I shined my light, but nothing could make it move. I was terrified, but eventually decided I had to move forward anyway. Luckily, once close enough, I found the eyes belonged to those of a very large deer. Nothing to worry about. 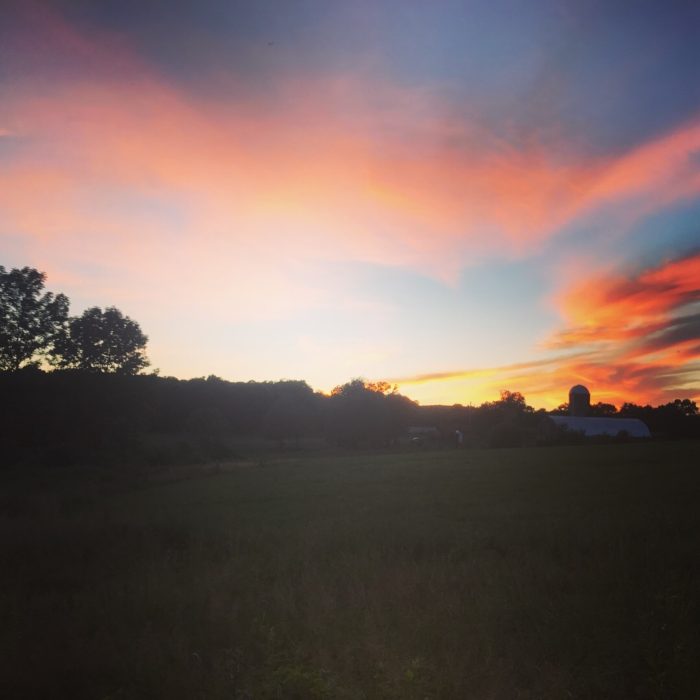 I breathed a sigh of relief, had a good chuckle, and went on my way. By this point, fireflies had begun to decorate the fields that I was passing, and fireworks from a nearby farm began to light up the night. I had a bit of a runner’s high, and was feeling pretty incredible about life.

I successfully completed my marathon (plus an extra 1.3 miles) and finished at a shelter on a farm where several trail friends greeted me. It was a spectacular hiking day in New Jersey.

In addition, the next day these same friends (Show Pony, Baba Ganoush, Moss, Steak, and Tortilla) and I got the crazy idea to try to see a movie at the local drive-in theater (though this was technically in New York). (Call me old fashioned, but I love me a drive-in). We heard a rumor that they allowed hikers to camp onsite, so after much deliberation (and me almost backing out), we decided to risk it. We were offered rides by two generous local sisters, and found when we arrived that the drive-in was directly next to a cidery and grocery store. Score! Obviously, we had a couple of drinks before trying our luck with the camping. (I had a ginger beer cider, which was incredible). 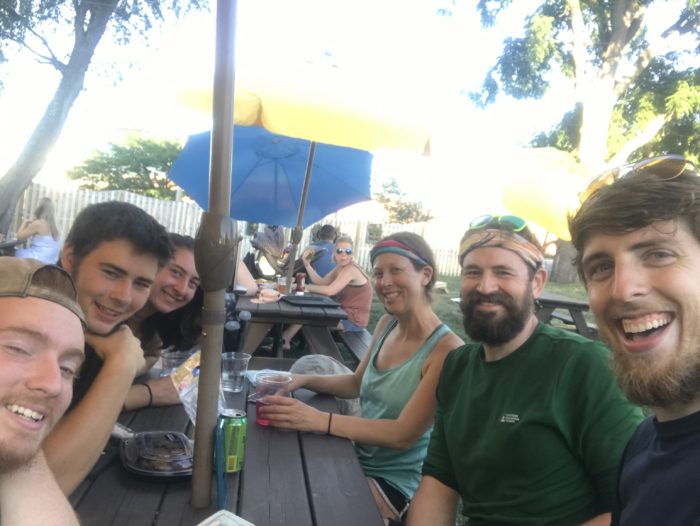 Once happily tipsy, we strolled up to the theater and hoped for the best. We spoke with a comedic local named Mark, who told us we could camp on the hill behind the theater and pay at the window. We promptly set up, swung by the grocery store for snacks, then got in line behind the cars to pay our movie fee. Except then, Mark called us over and informed us that he’d actually been messing with us and we didn’t have to pay. Score! So we had free camping and a free movie. It was a great night. 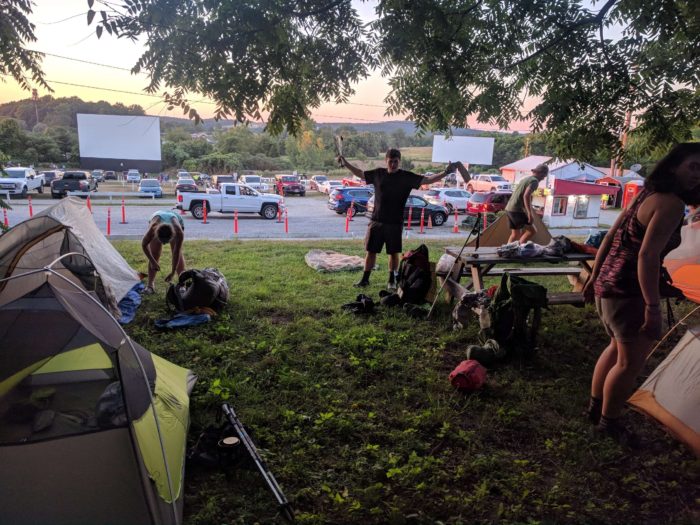 People often ask me how people get their trail names. Speaking of these trail friends, this seems like a good time to share one. My friend Walker, now jokingly known as Tortilla, just got his new trail nickname today. After consuming some questionable meat from the grocery store last night, his stomach was a bit off today. He wasn’t quite prepared for this, so may have run out of toilet paper. What did he use instead? Tortillas. Four of them. We all found this hilarious. 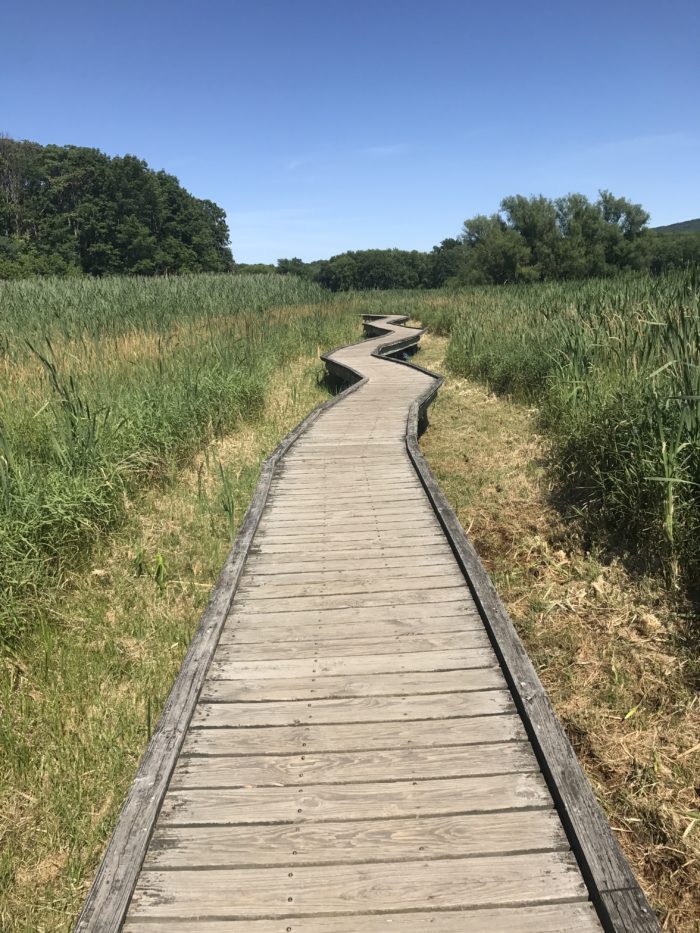 Anyway, all of this to say, Jersey has been a treat. Bears, lots of trail magic, sunshine every day, new friends. It has treated me well, and I’m grateful.