Connecticut and Massachusetts were a bit of a blur, though both perfectly lovely states to hike through, and nice gateways to the north. Connecticut only boasts about 50 miles of trail and Massachusetts about 90, and we were feeling strong throughout, so they went by in what felt like the blink of an eye.

Connecticut was an easy, pretty section of trail, containing small rolling hills and flat riverside strolls rather than steep climbs. And trust me, I didn’t mind a bit. It was made even easier for us because Head Chef’s parents, who live in NY near the Connecticut border, generously agreed to host us for three days while we were passing through, and slackpacked (hiking without our gear) for two full days. So in all of Connecticut, we hiked only one full day with our gear and camped only once. 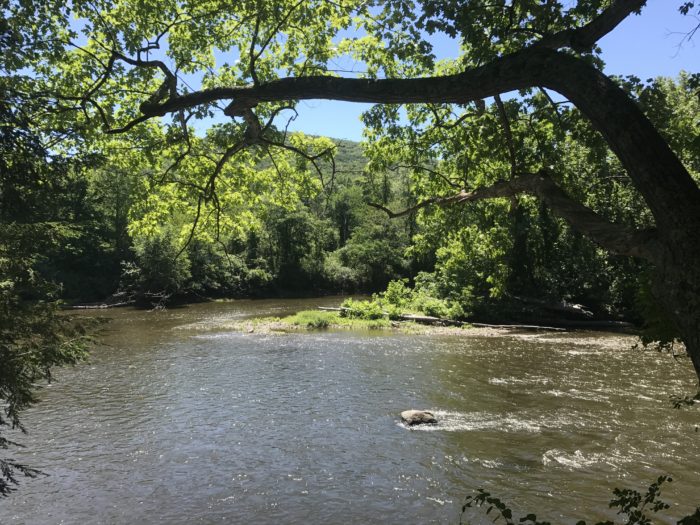 I would have been perhaps disappointed about this fact, because I was actually a big fan of Connecticut – with its charming farmlands, wildflowers, rushing rivers, and loads of sunshine – save for the fact that we were really living the life at Chef’s. His family lives on an incredible wooded property, with a gorgeous farmhouse and in-ground pool (which of course we took advantage of), with plenty of woods surrounding it – making us feel right at home. Chef’s mom, Sue, cooked us some incredible dinners, Chef himself cooked us some incredible breakfasts (with farm fresh eggs from their chickens), we got to sleep in comfy beds, and to top it all off, we got to become best friends with the family dogs – Diesel and Blackjack. It was a wonderful few days, and we were extremely spoiled by their generosity. It really made Connecticut a special treat for us. 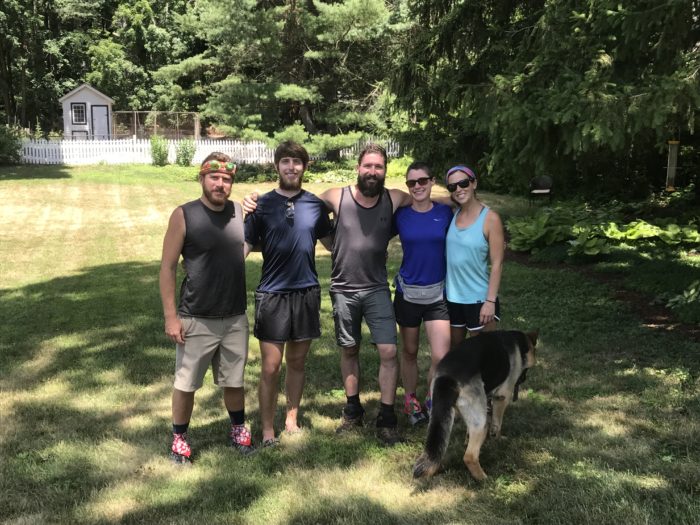 Fast-forward to Massachusetts, which to be honest, felt like it went by even faster than Connecticut, though it was in fact longer. I loved its New England vibes, friendly people, deep ravines, and finally, some real climbs with worthwhile views for what felt like the first time since Virginia. The terrain really started to look more northern here – with more pine forests and fewer bogs. I discovered here that the last several states had left me a bit out of shape – I hadn’t been doing any real elevation gain since Virginia, so I’d lost my climbing legs. (But not to worry, they did come back after some work). 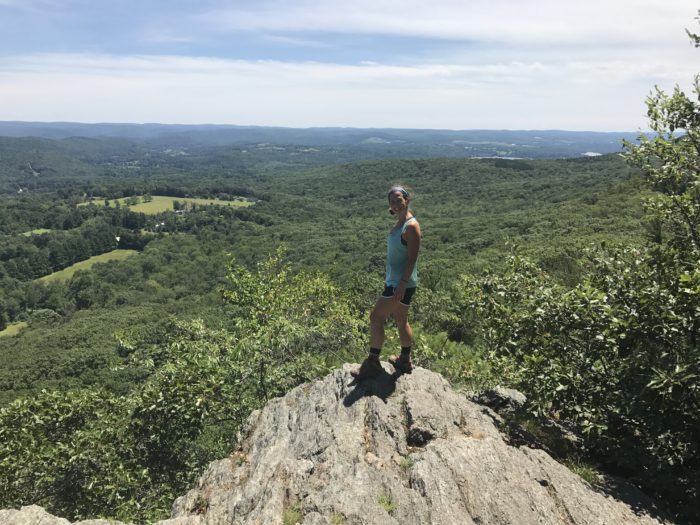 Thirty of those 90 miles were also done in one day, at least by Chef and me. Peppermint needed to reach town for some adulting, so talked the tramily into putting in some high mileage (very tiring) days. Chef found me in a bit of an unhappy (to say the least) state on one of these days. Thirteen miles into a 24-mile day with lots of ups and downs, and I didn’t know how I was going to finish the day. I was exhausted and grumpy. We started chatting (he’s good at distracting me from my woes and he knows it), and I told him both how I was angry about being pushed for miles, and how I was unhappy with myself that I’d yet to do a 30 and thought it was too late (the terrain starts getting more difficult in Massachusetts and the last three states are supposedly the hardest). Somehow, this led to Chef feeding me strong coffee mixed with protein powder and us doing a 30-mile day! Our reasoning was that if we pulled a 30 that night, we’d only have 14 miles to go to get into town the next day, so we could enjoy some comfort and relaxation for half the day rather than arriving in the evening exhausted.

They say the trail provides, and oh boy, did it provide. About 10 p.m., two hours before we’d finish, when energy levels were waning, what should appear in the woods, but some trail magic. It was the most unique (and hilarious) trail magic that I’d seen. There were two coolers, empty of drinks (they’d already been taken by hikers), save for an unopened jug of water. I figured I could use some extra water, so opened it up, filled my bottles, and went to throw it in a big metal trash can in between the two coolers. To my surprise, the trash can wasn’t full of trash. It was full, almost to the brim, with treats. Pop-Tarts, candy, Twinkies, cupcakes, pastries, you name it. And you better believe we gobbled down as much as we could stomach. With 26 miles done and four more to go, this sugar rush was exactly what the doctor ordered. (Thanks, Commander, if you’re out there.) And with that, we successfully completed our 30-miler, finding a comfortable camping spot in a pine grove next to a brook exactly when we needed it. The trail provides.

Though it was hard, we actually had a blast doing the 30. We joked, took turns playing DJ, and tried guessing what the glowing eyes were in the night. I had only ever night hiked solo, which I enjoyed but also found slightly unnerving, so it was a fun experience to have a buddy along. The 14 miles the next day were honestly more of a struggle than the 30 itself.

The next day, we rolled into town by early afternoon and were able to enjoy some hard-earned town food (a real luxury) and relaxation. We hadn’t told the tramily about our 30 until we were safely in town, in case anyone would have been so inclined to one-up us and race us to town. With bellies full of subs and beer when they finally arrived, we had a good laugh about our nighttime adventures on the trail and devious plan to arrive in town early. All in good fun. 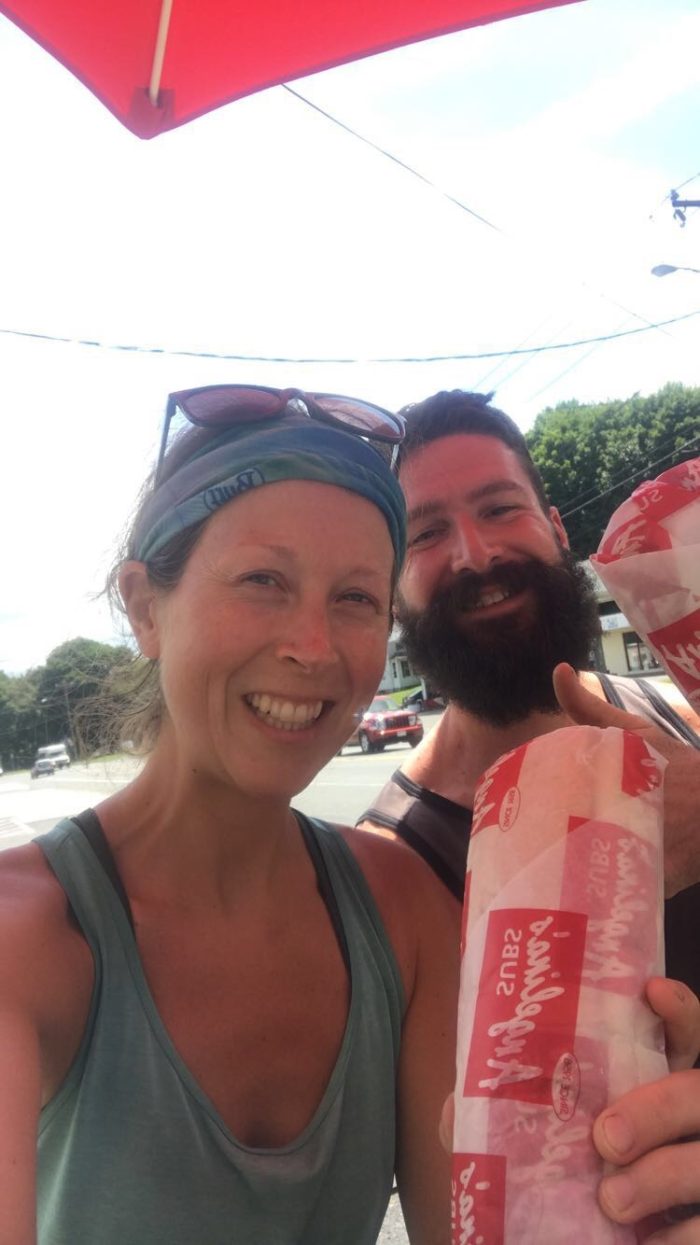 All this to say, another two states down and we’re still having fun. I’m dreading the day the adventure is over – I’m still so in love with the trail.